Project Details
2012 Total Cost $0.00 Total Capital Cost 0.00 Latitude / Longitude Method Unknown Latitude 41.008611 Longitude -80.000000 Elevation 0
Description: The Jennings Passive system is located at the Jennings Environmental Education Center, a Pennsylvania State Park, near Slippery Rock, PA in Butler County. The site has served as both a research and education/outreach site for both the Slippery Rock Watershed Coalition (SRWC) and the park itself. The site has been also used by numerous governmental agencies and educational institutions to conduct research on AMD and passive treatment including US Bureau of Mines, US Department of Energy, PA DEP, Slippery Rock University, Grove City College, and Westminster College to name a few. The original passive system consisted of a series of wetlands that were constructed around 1988 following the blowout of an underground mine seal completed during Operation Scarlift. Then around 1994, an Anoxic Limestone Drain was installed, but quickly plugged due to the ferric iron and aluminum. An innovative Vertical Flow Pond (VFP) was constructed in 1997 using a mixture of compost and fine (#9 special) limestone as the treatment media. After 15 years of operation the treatment media was replaced in 2012 with a slightly different treatment mixture consisting of compost, wood chips, and 2B limestone. 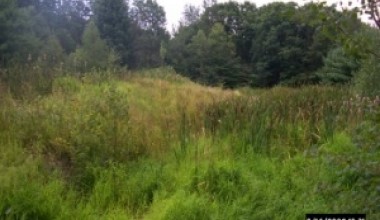