Project Details
Total Cost $0.00 Total Capital Cost 111632.00 Latitude / Longitude Method Unknown Latitude 41.469426 Longitude -76.402204 Elevation
Description: As part of it bond forfeiture program, the PA DEP Moshannon District Mining Office operates and maintains a passive mine drainage treatment site emanating from the Gutten Drift at the Lewis Mine Drainage Treatment System in Cherry Township, Sullivan County. The system was installed in 2007 on a bond forfeiture site through Section 18 of the Surface Mining Conservation and Reclamation Act. The passive system consists primarily of a small basin (forebay) and a 13,000 ft2 vertical flow pond (VFP). The system discharges to a channel and road ditch that eventually discharges to Birch Creek, a tributary of the Loyalsock Creek. The VFP operates by vertical flow of acid mine drainage (AMD) down through 12 inches of organic substrate and 36 inches of limestone aggregate, where the water is collected in an underdrain and discharged to a rock channel through a water level control structure. During the first three years of its operation the system effectively neutralized acidity and removed metals. This treatment occurred with little head loss. In 2011/12 the system began to discharge elevated Fe and head losses were apparent indicating that water was not flowing freely down through the substrates. There are several reasons that could contribute to the change in effectiveness. First, the site was reclaimed in 2011 which involved the backfilling of a large pit that was hydrologically connected to the discharge and the surface application of biosolids. These activities clearly affected the discharge chemistry as can be seen in Table 1. The discharge is less acidic, but contains more iron than was the case before the reclamation occurred. Secondly, in September 2011 Tropical Storm Lee produced 6-9 inches of rain locally. Erosion to a portion of the VFP berm and the emergency discharge channel indicates extremely high flow rates that overwhelmed the system’s hydraulic capacity. This event likely carried sediment into the VFP. Lastly, in the summer of 2012 the VFP became densely vegetated with sedges. The VFP was intended to be an open water system with negligible growth by emergent plants. Inputs of sediment and dense growth by plants could decrease the permeability of the organic substrate and explain the head losses. The VFP needs to be rehabilitated so that it will treat the discharge as originally designed. The rehabilitation should include repairs to the system caused by Tropical Storm Lee, correction of the substrate permeability problem, design and installation of a settling pond that will allow solids to be trapped when the system is flushed, conveyed by a newly constructed rock-lined channel that will collect the braided deposition of solids below the current discharge outflow channel. 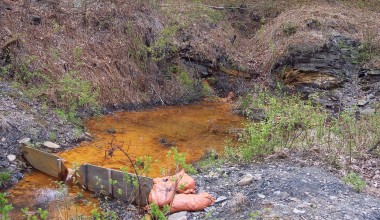