Project Details
Total Cost $0.00 Total Capital Cost 0.00 Latitude / Longitude Method Unknown Latitude 40.667500 Longitude -76.320000 Elevation 0
Description: Original Construction by RETTEW Associates The Otto Colliery Airshaft Discharge (Otto Discharge) near Branchdale, Schuylkill County, is one of the largest sources of abandoned mine drainage (AMD) in the Schuylkill River watershed in southeastern Pennsylvania. The Otto Discharge originates from a former airshaft of the Otto Colliery near Branchdale, Reilly Township, Schuylkill County, PA. The discharge contributes the majority of streamflow to Muddy Branch at their confluence. Muddy Branch flows from the western boundary of the watershed to the West West Branch of the Schuylkill River which then joins the West Branch of the Schuylkill River. Because of metal loading from the Otto Discharge and other AMD sources, the entire West Branch of the Schuylkill River is designated “impaired” on the Pennsylvania Department of Environmental Protection’s 303(d) List of Impaired Waterways. An assessment, completed in 2000, that focused on nonpoint source pollution in the Upper Schuylkill Watershed ranked the Otto Discharge as one of the most severe in the watershed due to its high flow and iron concentrations and recommended that its remediation be given high priority. Downstream of the discharge from the confluence with the Muddy Branch, the water and streambed of the waterway takes on a decidedly orange tint owing to iron and other metals loading from the Otto Discharge. U.S. Geological Survey (USGS) data, collected during 1997 to 2000 indicated the flow from Otto Discharge ranged from 630 - 2,300 gallons/minute (gpm) and averaged about 1,300 gpm. The discharge water was consistently near neutral (pH 5.7 - 6.1; alkalinity 34 - 66 mg/L CaCO3; acidity 22 - 232 mg/L CaCO3), poorly oxygenated (0.1 - 2.2 mg/L O2), and contaminated with dissolved metals (Al = 0.1 - 1.3 mg/L; Fe = 3 - 16 mg/L; Mn = 2 - 3 mg/L). Similar water quality data from the Upper Schuylkill River Watershed Assessment indicates that flow from the Otto Discharge ranges as high as 10,000 gpm. The overall goal of the Otto Discharge Project is to reduce metals loading, primarily iron hydroxides, and promote the restoration of aquatic habitat in Muddy Branch and ultimately the West West Branch of the Schuylkill River. The completed treatment system diverts and aerates the existing discharge with a low-head dam and hydraulic aeration device; detains the aerated water within an oxidation pond; promotes deposition of iron oxide precipitates that form as a consequence of aeration within the oxidation pond and two constructed, aerobic wetland cells; and finally removes manganese and trace metals in an oxic limestone drain that adds alkalinity and mitigates temperature fluctuations. The project, completed in September 2005, implements and evaluates a passive, aerobic treatment system that incorporates several innovative features to facilitate the removal of iron, manganese, and other metals while maintaining sustained flows of oxygenated, cold water required by native aquatic organisms, such as brook trout, in downstream reaches. A quantitative model for the prediction of effluent quality as a function of influent flow, temperature, pH, dissolved oxygen, and iron concentrations will be developed that will advance the state of the science for design and evaluation of “passive” treatment systems for AMD. Funding for the Otto Discharge project was supplied by a $432,000 USEPA 319 grant. The Schuylkill Headwaters Association, Inc. (SHA), Trout Unlimited (TU), Schuylkill County Conservation District (SCCD), RETTEW Associates, Inc. (RETTEW), and USGS developed a partnership, in collaboration with Reilly Township and the Blaschak Coal Company, for the successful design, implementation, and evaluation of the treatment system. Due to reducing funding the hydraulic aeration device was eliminated from the original design. 2022 Reconstruction (Phase 2) by Alfred Benesch & Company A design grant in the amount of $68,727.00 and a construction grant of $785,697.00 were obtained to both clean-out the existing system of sediment and vegetative matter and improve aeration and settling. The new design adds passive aeration devices in the influent channel and long aeration curbs between all the ponds. The ponds have also been reconfigured to improve settling. Please refer to the attached plans for more details. 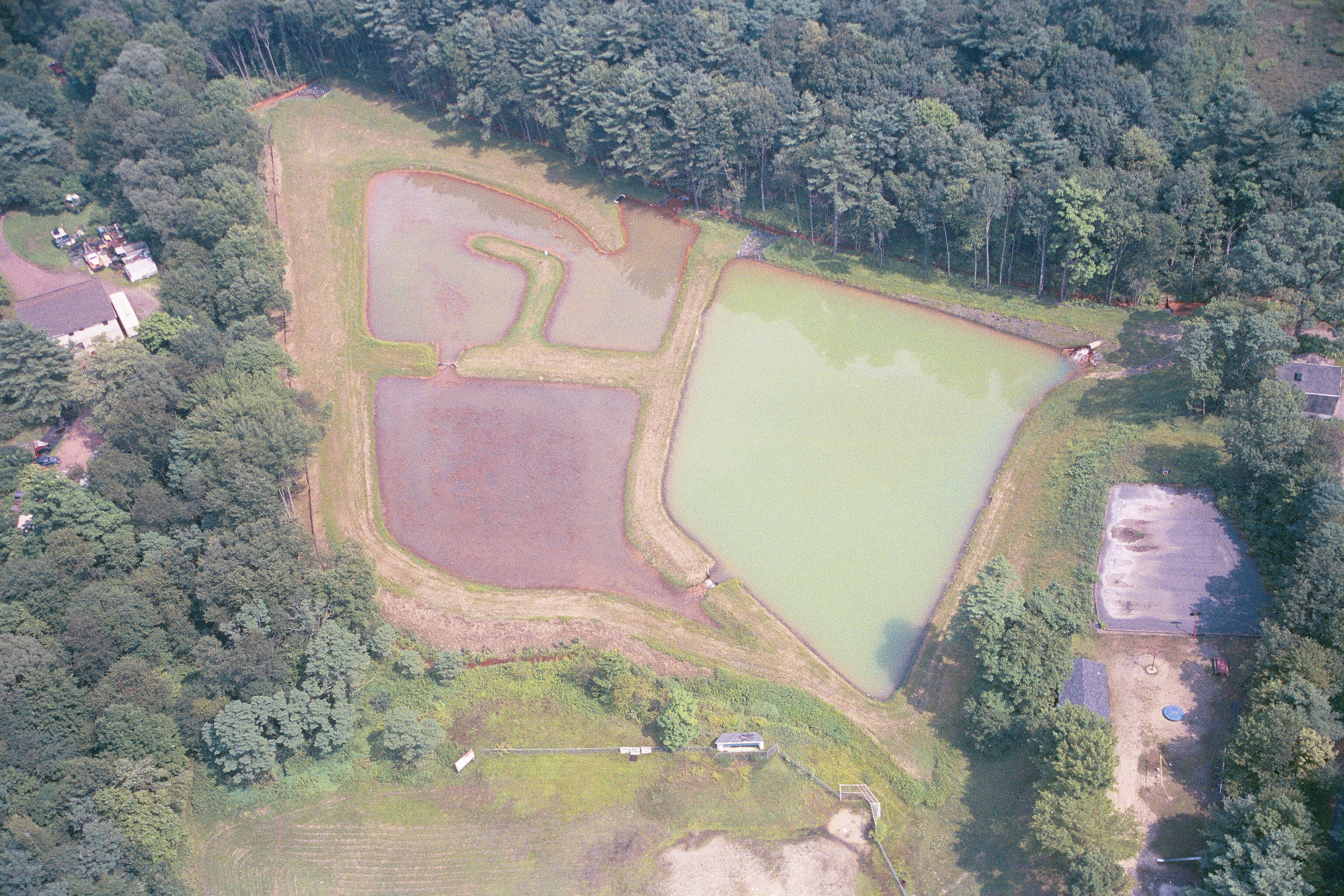