Project Details
2012 Total Cost $0.00 Total Capital Cost 85000.00 Latitude / Longitude Method Unknown Latitude 40.487465 Longitude -78.514620 Elevation 630
Description: Site 26 is located on Pennsylvania Game Commission property (SGL 198). Originally constructed in 2004 it contains an ALD, one separate flush pond, a sedimentation basin, a five acre wetland and finishing/ manganese removal bed. The discharges are collected underground, run through the system and then discharged into an UNT to Sugar Run. Locals refer to the UNT as Gum Tree Run 2006 - the outflow channels in the flush pond and sedimentation pond were lowered. also a water control structure was added to the flush pond to eliminate discharges during flushing. All improvements were done in order to ease routine maintenance 2012 - ALD was failing due to clogging. 3/4 of the limestone in the ALD was removed and cleaned. half of the influent pipe was replaced and a new baffle system installed. additionally an effluent flume was installed (in order to quantify the systems discharge) and the manganese bed was regraded so that all of the water would flow through the stone and not across the top. 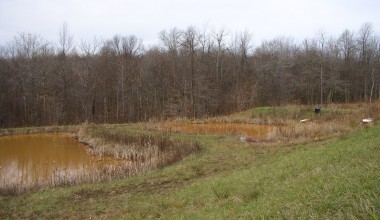